A self-proclaimed lover of deep, sexy and soulful house music, French-German DJ and producer Jean Claude Ades’ heart is firmly entrenched in his adopted home of Ibiza. The record label boss runs the successful ‘Be Crazy’ party at Lio and hosts a weekly Ibiza Global Radio program and as the summer 2016 season comes to a close, he is preparing to take over the decks at the annual El Chiringuito closing party. Here he talks island life, evolution and musical memories.

What is your earliest musical memory?

My father had a collection of classical and jazz music so I grew up listening to this while my mum was into The Rolling Stones, The Beatles and Queen. We had guitars, a piano and a violin in the house so you could say I grew up in a creative environment. I started to play piano very early which made a big impact on me, then I really fell for 80s music – it always stuck in my head and mind. Today, you can always hear my 80s influences when I make a record.

Who has been the greatest musical influence on your career?

As a producer it was Trevor Horn. He produced The Rocky Horror Picture Show, he worked with Seal in the beginning and for me he is the best producer of all time. Just the way he creates his productions and the way he arranges his music is so sophisticated and incredible. Also William Orbit – a major inspiration to me as a producer.

Artistically what have been some of your career highlights?

Most of the records I have done in the past that I really like are quite outside the box, the ones that I am proudest of artistically because I put a lot of love, patience and care into them. Ironically most of these records didn’t sell… but commercial success doesn’t mean so much to me. It’s nice to make a living as an artist from music, which is the biggest goal from an artist’s perspective, without being forced to do things you don’t like. I am so grateful I enjoy everything I do from my record label to my night at Lio, to the crowd that comes – I found my niche.

As a creative, where do you look for inspiration?

My inspiration comes from my state of being. Most importantly, I need to be super rested. If I have been playing or partying it takes five to six days of being super healthy, with sports, relaxation and healthy eating to get my motivation back. Inspiration comes when you are motivated – if this is in place and you go into the studio, everything flows. In a club, it is all about the energy in the moment and how to choose that next step. Reading the crowd is everything – which I am constantly doing.

What do you listen to when you’re not making music or in a club environment?

In private? Zero. I’m happy to hear only the birds and mostly silence. I don’t even have a sound system at home – there is never music in my house! Of course if I invite friends over for a dinner party we have music in the background but because I am always surrounded by music it’s nice to feel the peace.

What drew you to Ibiza?

It’s a holiday place so people come here with an open mind. They want to hear different genres of music, with the best DJs in the world at so many different parties with different communities. You get so much inspiration from one compact island, every day you can choose to do something different – the island has an intense energy; it’s unlike anywhere else in the world!

Has the island been intrinsic in your career?

When I came for the first season in 2001 I rented a house with a studio and there was so much going on, so much great music, I was going out a lot and getting inspired and then bringing this all into the studio with me to get creative – it was amazing. I ended up producing all summer with people like Barbara Tucker, Niki Haris and Dannii Minogue – I produced her worldwide hit “I Begin to Wonder”. From there I started to get booked as a DJ and began to tour the world and evolve.

What made you decide to call Ibiza home permanently?

I have always been here because of my residency and my parties, so I was spending each summer in Ibiza and moving back to Munich in November just in time for the cloudy, dark and rainy weather. For what? Although I had a fantastic place that was beautiful in the summer, the reality was that I wasn’t there and I didn’t want to spend six months in Munich anymore.

How have you seen Ibiza evolve in the years you’ve been here?

I love it more and more. The season is longer, so now there is still lots going on in October and November. Living quality is better, places stay open plus roads are better. Even past the seasonal closings you can still enjoy the island. There are five-star resorts, spas and cosmopolitan dining options. Of course, you can experience the authentic Ibiza by going north and enjoying Benirras but you also have so many more options now.

Is there anywhere particular on the island that is special to you?

I really love to take my bike and ride through the hills behind San Antonio near Benimussa Park. If you arrive to Km4 or Km3 you’ll eventually go downhill for 25 to 30 minutes and it’s absolutely beautiful. The landscape is just amazing, especially in the winter when all the crowds are gone.

What direction do you see Ibiza going in from here, culturally and musically?

I think it’s important to have regulations because the island would go insane. It will go crazy and it goes crazy anyway. I think the police are controlling it very well; not too much but not too little. It’s important to have police control and presence so that people feel safe. And when it comes to clubs closing down – there is already so much partying, people would just get sick of it if the clubs stayed open all the time. The island is only getting busier – more people came this year than ever, which was record-breaking tourism. We are reaching a tipping point here in Ibiza and it will get to a point where everything has been done. 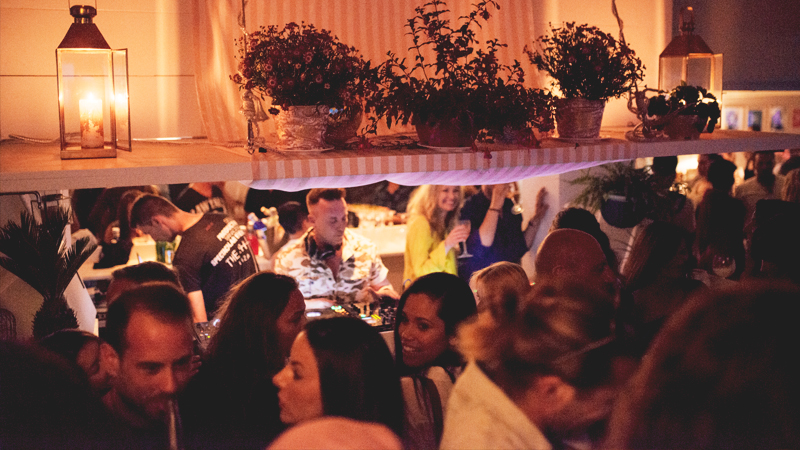 Whether it's an amazing meal or the most relaxing afternoon at the beach, explore what El Chiringuito has in store for you. Our journal celebrates the beauty & lifestyle of Ibiza and the unique international influences on our island’s spirit. We look forward to seeing you soon!