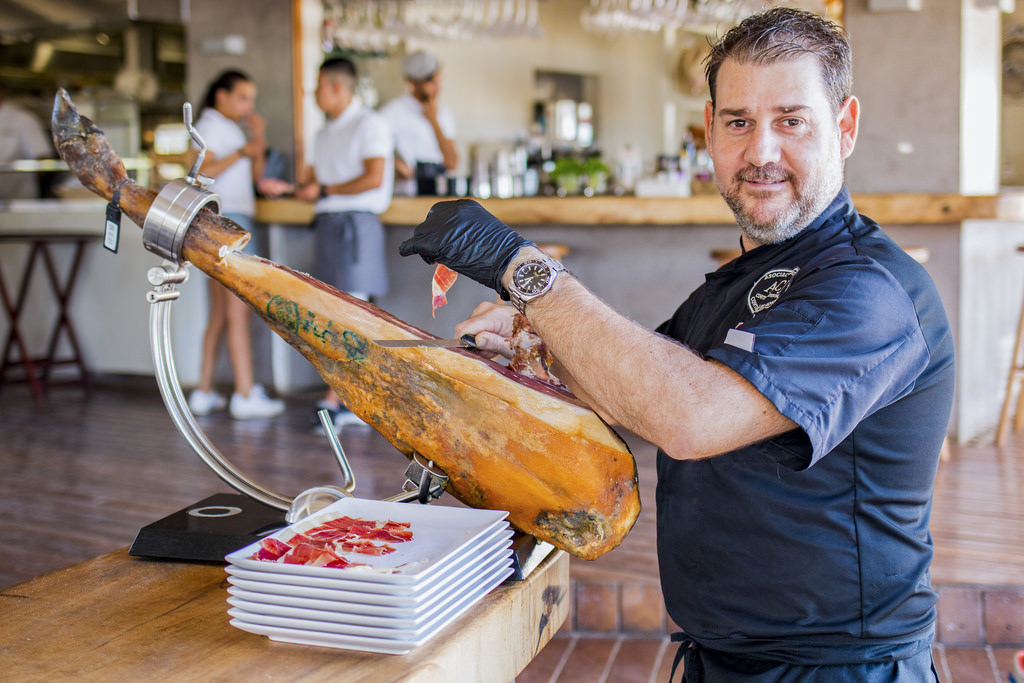 Joaquín Ibarra’s family has been Ibiza’s preeminent provider of all things ham for the last 30 years. His father married an Ibicenca and they left Granada in the 1970s to settle in Ibiza and take advantage of the many work opportunities during the boom of construction that swept the island at that time. Like many transplants, Joaquín’s father soon began to miss the traditional foods of his homeland so he founded Los Andaluces, a company dedicated to supplying the substantial Andaluz community with their favourite ingredients and produce.

Since then the family business has grown exponentially and Joaquín has become known as the go to man for high quality, traditionally produced Spanish hams in Ibiza. Today you’ll find his ‘cortadores de jamón’ (master ham cutters) wielding their knifes just behind the DJ booth at El Chiringuito and on the stylish BEACHOUSE Ibiza terrace. Here’s Joaquín tells us the story behind a trend that hopefully will never stop. 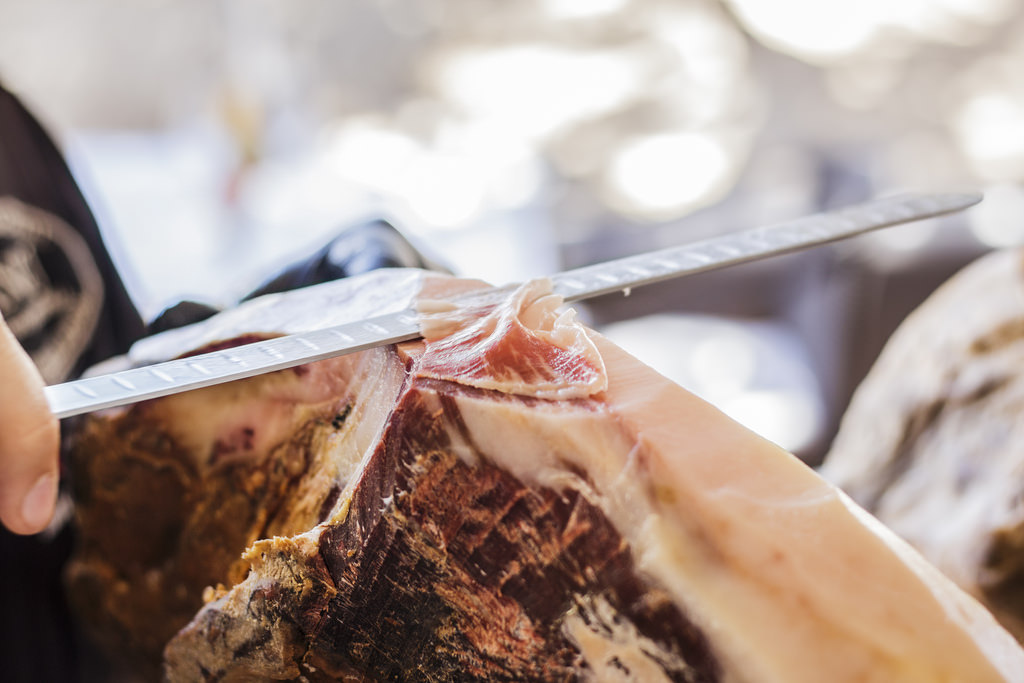 How did you come to work with El Chiringuito?

We were supplying ham to El Chiriniguito during their first year then Olivia [Fleury – owner] wanted to serve the best ham under the best conditions possible so she asked me to come and cut the ham on site as it was ordered. Honestly, at first when she asked me to supply someone to cut the ham, I thought it was strange. I didn’t see it the way she did but she was right, it works really well and the final product that goes to the table is of a higher quality because of it. To eat ham that has been freshly cut is nothing like ham that has been stored in the fridge and cut on a machine. El Chiringuito were the pioneers and now lots of places have followed. We’ve been working in Ibiza for 30 years but to be connected with El Chiringuito is a real honour.

There is quite a skill to cutting ham correctly – tell us more?

There are lots of private schools where you can learn how to cut ham correctly; how to cut it, how to present it on the plate, how to care for the ham. The Spanish Association of Cortadores is a place that accredits professional cortadores, All of our cortadores are accredited. Here in El Chiringuito, where quality is the most important thing, there needs to be a professional cortador, someone who knows what they are doing. The ham can be of excellent quality but if it is not handled well, that quality is lost.

What is the difference between the various types of Spanish ham?

The most economical ham is produced from white pigs and is called Jamón Serrano. You’ll see it at the charcuterie and in sandwiches. It’s economical because the production is very fast. A white pig is ready at around six months of age. It gets salted and within two months it’s ready for market. It is nothing like Jamón Ibérico. The truth is, once you have tried Jamón Ibérico you can’t go back! But, it’s still a traditional ham; it’s the biggest seller. Jamón ibérico comes from the Ibérico pig. It’s black, much closer to a wild boar and nothing like the white pig. It was very close to becoming extinct because it takes a long time for it to fatten up and be ready for consumption. During the 50s and 60s when production and farming in Spain started to industrialise, the white pig was more appealing because it grows faster and you can feed it industrial feed. Real Jamón Ibérico is much more expensive because it takes longer to grow and the food the pig eats is very specialised. It’s free, in the country, they get to eat whatever they want, acorns, truffles, mushrooms, grass, bark and wild herbs. They get exactly what they need from the forest and the method hasn’t changed in hundreds of years. 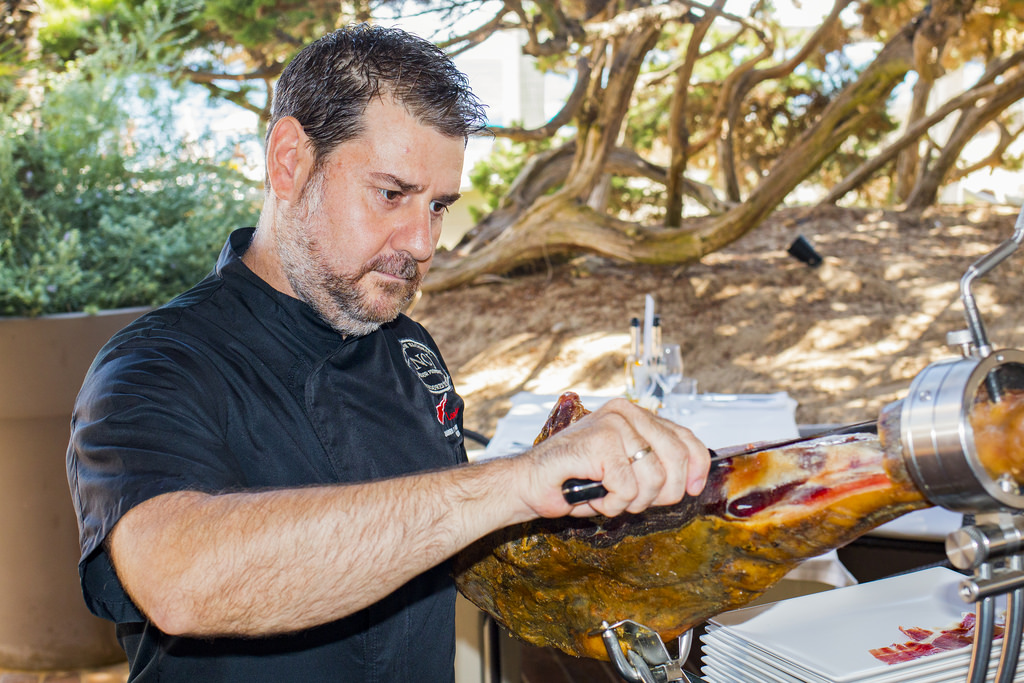 Are there differences in the type of Ibérico hams?

There are four levels of Jamón Ibérico. Ibérico ham comes from pigs that are often cross-bred, cereal fed and have no free range time. Recebo de campo comes from pigs that are free-range during acorn season and are then fattened for market with cereals. Then there is 100% Bellota, raised on acorns and foraging. At El Chiringuito we serve Recebo de campo and 100% Ibérico de Bellota, which is the best of the best. Its diet is totally natural and is from purebred Ibérico pigs. It has a very strong flavour, for some people it’s too strong and we recommend the Recebo de campo, which is sweeter. We explain the characteristic between them – it’s a bit like wine. Some people like robust wines and others prefer lighter.

And like wine, are there are vintages of Ibérico ham?

During acorn season the pigs are eating day and night, it’s impressive how many acorns they eat! 70% of the weight they gain is during this period – around three months. The more acorns they eat, the better quality ham is produced. Seasons when the acorns were plentiful means a high quality vintage just like wine; it depends on the acorn harvest of that year. For example, next year we will start to sell the 2014 Bellotas, which everyone is saying are extraordinary. It was a spectacular vintage as the conditions were perfect. They’ll arrive around Christmas and we’ll sell them here in El Chiringuito in summer 2017.

How do the acorns change the quality of the ham?

A ham produced from a free-range Ibérico pig raised on acorns produces a fat that practically melts in the mouth. It’s sweet and easy to eat. Even their shape is different; the legs are slimmer because they are moving much more and the body is longer because they are much more active. On the plate it looks totally different, it shines, it has a darker colour. An Ibérico pig that is raised on feed produces a tougher ham; it’s still very good but not as delicate. It’s not just the diet. To produce Jamón Ibérico you need certain conditions that are only found here in Spain. For a ham from an Ibérico pig to go from the forest to the table takes about five years. It’s expensive because it takes a long time to produce. It’s still an artisanal process – even though technology helps to control the climate in the drying stage, everything else is done by hand as it has always been done. Above all, it’s a completely natural product. It doesn’t have preservatives or colours. Nothing is added. Just meat, salt and time. That’s all.

How many legs of ham do El Chiringuito clients consume over a summer?

Uuuff! A lot! More than a hundred, that’s for sure.

Whether it's an amazing meal or the most relaxing afternoon at the beach, explore what El Chiringuito has in store for you. Our journal celebrates the beauty & lifestyle of Ibiza and the unique international influences on our island’s spirit. We look forward to seeing you soon!